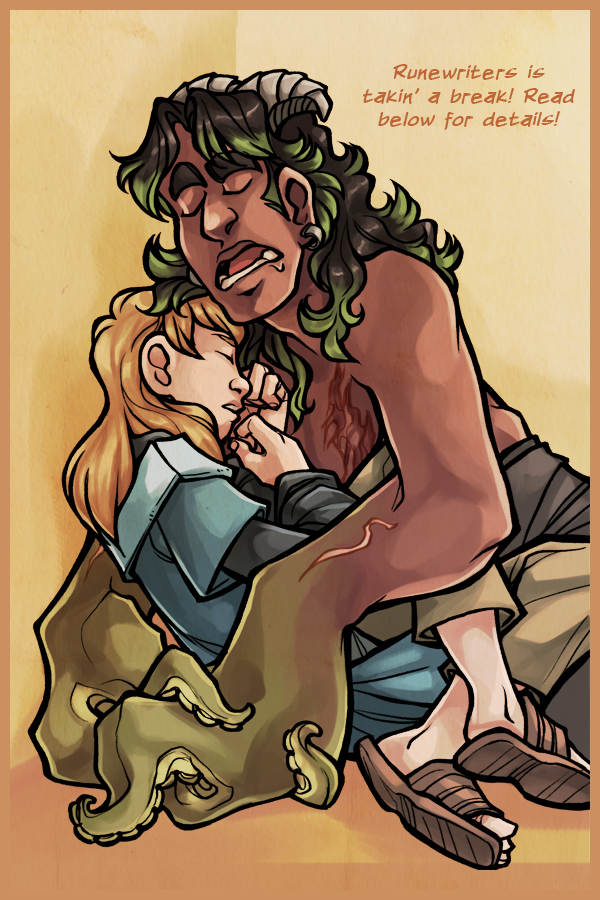 February is here, so it's time for me to weigh in for reals now! But honestly, although it's a tough decision to announce, it isn't a hard decision to make -- it's really obvious to me that I gotta take a break from Runewriters for a bit and do some different art. I care so much about this story, but my heart just isn't in it right now, so I'm gonna give myself some time to step back.

The timing is trickier -- it's always tempting to want to be able to jump right back in and I have a habit of giving myself less time than I really.... should.... and it's hard to say how long a break should be when there's not something specific I'm trying to do over the break (aka, a break for doing work, aka, not actually a break). So let's check back in a year! I'll also check back in around August and let you guys know where things stand -- if I'm planning to Actually Start Updates in January or if anything has changed or what's goin' on there. So, in August I'll let y'all know if anything new is going on, but January of 2020 is when I'll do an official check-in/update on the comic's schedule.

If you just wanna see my art or hang out with me in the meantime, you can! I'm on tumblr as long as it sticks around, twitter, and now pillowfort, I'm around a bunch on the RW Discord, and my patreon now has two tiers -- first tier gets you Sketchbook updates where I just show off a bunch of sketches I've made that haven't been shared publicly anywhere, and the second tier gets you regular patron livestreams (we're currently doing about 3-4 short streams a month) where we vote on what I should draw and then I draw it. I'll still be around making art!! I just gotta step outside this story for a bit and stretch my brain before I can jump back in. :>

(Thank you all so much for all your kind messages and how incredibly supportive you've all been when it's hard to articulate why I need to stop for a bit. ;u; You guys really are the best, and a huge blessing always. Lord willing, hope to see you all again before too long! :D

---
!!!OH ALSO! I'm supposed to be at ECCC this year!! so if you're planning to go and you wanna pick up some books or say hi, I'll have some space at Kel McDonald's table??? I'LL HAVE MORE INFO VERY SOON twitter is probably the best place for updates!! Okay now I'm ending this post for reals)